Luke 17:17,”And Jesus answering said, “Were there not ten cleansed? but where are the nine?”

… Ten lepers got together one day and finding their opportunity, called out to Him, “Jesus, Master, have mercy on us.” One of them was not an Israelite but, hiding among the nine he calculated that he would get in on the deal. The Jewish Master would not notice, he schemed, or ask for pedigrees and he would blend in and get a blessing just these Jews. Much to their surprise and amazement, the Teacher granted their request. Jesus, knowing the Law, said to them to go to the priest for pronouncement of cleanliness and as they went, the record says, they were cleansed. The Samaritan watched wide-eyed as the white scales fell from under his robe and out of his sleeves and his arms were clean and beautiful for the first time in years. This one returned running. He thanked Jesus for cleansing him. Jesus looked at him and saw that it was not one of the Israelites to whom He was sent, but a man of a bastard culture, a land that worshiped a god named Yahweh, but whose worship was far from true, and whose understanding was far from pure. He had but a vague idea what Jesus wanted him to do when he was asked to go to the priest. He was not allowed to even approach a priest. He just did as he was told. Now, overwhelmed with gratitude, he returned and thanked Jesus.

Jesus looked at his disciples and asked, “Were there not ten cleansed? But where are the nine? There are not found that returned to give glory to God, save this stranger. And he said unto him, Arise, go thy way: thy faith hath made thee whole.” (Luke 17:17-19)

Here is a question for us, what made the others whole? Were they made whole, or were they merely healed?

It is when we return and give thanks, it is when we realize our before and after condition, that our faith makes us whole. There are many who have bowed at an altar, many who have made professions of faith, prayed a prayer, even repented of sin, but few have fully realized our wonderful blessing and returned in humility to give thanks.

This quality of gratitude is a missing ingredient in the salvaging process. We cannot teach thankfulness, we cannot put it into a tract as a step to salvation.

We cannot demand appreciation, as it would become an act of compliance instead of a spontaneous act of love.  However elusive unprompted gratitude may be, it is the point that our unworthiness occurs to us that becomes the point of our salvation and wholeness – not the time of our cleansing.  The return to show gratitude is the visible indicator that a man has been adopted into the family of God – and that point is out of our control.

Many have been touched by Christ, many have been forgiven of Him, but few have been made whole. When it comes down to words on paper, it cannot be better said than, “Many are called, but few are chosen.”

There is a special message here to we who are Gentiles in the flesh. Do we fully realize that we have received cleansing by “hiding” among ungrateful Jews? Paul’s comments on this matter are worthy of note.

“I say then, Have they [the Jews] stumbled that they should fall? God forbid: but rather through their fall salvation is come unto the Gentiles… For I would not, brethren, that ye should be ignorant of this mystery, lest ye should be wise in your own conceits; that blindness in part is happened to Israel, until the fulness of the Gentiles be come in… ye in times past have not believed God, yet have now obtained mercy through their [the Jews] unbelief:” (Romans 11:11-30)

We have been called now to the feast that we did not, and yet do not deserve only because those who were called spurned their opportunity. If we have been called we must seek to be worthy of acceptance – at the very least we can be grateful. “For many are called, but few are chosen.”

Jesus used this phrase again when describing a man, invited to a wedding feast, who, when given a garment to wear, refused it for his own clothes. Here was a man invited in the place of ingrates, though unworthy, a man called, a man who answered the call, but he accepted the favor on his own terms. He wanted to participate in the festivities and food and wine at the expense of the wedding family, but he did not want to do it if cost him his identity to do so. In short, he was very ungrateful. “And he saith unto him, Friend, how camest thou in hither not having a wedding garment? And he was speechless.” He was promptly thrown out. For many are called, but few are chosen. (Matthew 22)

Another example was the story of the greedy workers who, after they worked all day wanted more than what they were hired to receive only because they saw others being paid the same for less work. Complaining to the husbandmen, they accused him of being unfair, though they received exactly what they agreed. They showed themselves ungrateful. Their wages were paid, but the last came before them. “So the last shall be first, and the first last: for many be called, but few chosen.” (Matthew 20:16)

We need not only be called; we need to be chosen for our gratitude and our lack of complaint. We need to be faithful and thankful. Do we ever consider the sacrifice made for us, the invitation we have been given, or the miracle that has been bestowed on our behalf? Have we counted the price paid by Christ for us as dear, precious and undeserved? Do we wear, without complaint, the beautiful garment we have been given, to appear to the world as one of His own? Do we try to hold to our own way, or withhold faithful service until benefits equal our idea of fairness? If we want to be counted with Him, there is only one way. The verse in Revelation lists the attributes of those who are with Christ, “… for he is Lord of lords, and King of kings: and they that are with him are called, AND chosen, AND faithful.” (Revelation 17:14)

If as many who were cleansed, were grateful enough to serve, our efforts of evangelism may reveal better statistics. Many people have professed faith in Christ because He once touched them. Most of our country, as well as a large portion of the world, has been to Christ and asked for cleansing, but only one in, perchance, ten have returned to thank Him, to serve Him, to honor Him… but… where are the nine?” 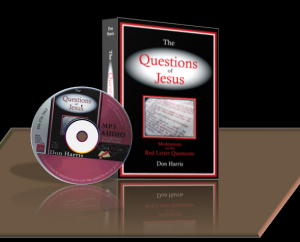 ~ Excerpt from The Questions of Jesus by Don C Harris.